Terraria is a sandbox 2D game with gameplay and a land of adventure, revolves around exploration, building, and combat. Players start the game in a procedurally generated world, and they will get three basic tools: a pickaxe for mining, a shortsword for combat, and an axe for woodcutting. When you mining or exploring underground caves, you will find many resources and notably ores, and these items will be accumulated on the base of limited amount of health and magic point. Player will use those resource he got to craft new items and equipment he need.

In Terraria this adventurous world, you will meet many different enemies, such as zombies, demon eyes, simple slimes and various region-specific enemies. In this case, you could use your weapons, swords, guns, and magic spells. If a boss monster was defeated, you will receive rare items and large amounts of in-game currency, and often get progress.

In the game, there are many non-player characters, such as merchant, nurse and wizard, they have built the room. But if you complete some special goals (such as defeating a boss or obtaining a gun), you could attract those NPCs and occupy their structures or rooms. Of course, you will find some NPCs when you explore the world and then they will live in your house. Sometimes you can trade with them, use coins to buy items, or sell items to them to get coins. Coins can be obtained by slaying monsters, finding treasure, and selling items to NPCs.

Every world is unique -- from the floating islands in the sky to the deepest level of The Underworld. Adventure to the ends of the earth, and battle villainous bosses along the way. As well as standard gameplay, there are also mods that can enhance the Terraria world. If the player journeys to the Underworld and summons and defeats a boss called the Wall of Flesh. The game enters “hard mode”, which adds many new and much stronger enemies throughout the world, as well as new NPCs, bosses, ores, and items. If normal mode cannot satisfy your needs, you can choose expert mode in which the difficult is increased by doubling the health and attack of monsters and bosses.

***If your device has less than 1GB of memory, you may experience performance issues if you create an Expanded World. The option to create Expanded Worlds is not available on devices with 512MB RAM or less.***

You may also like the GAMEs like: Fandom: Terraria, Official Terraria Wiki, and Launcher for Terraria (Mods), ect. 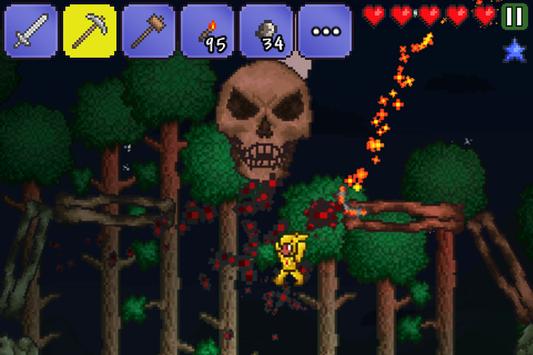 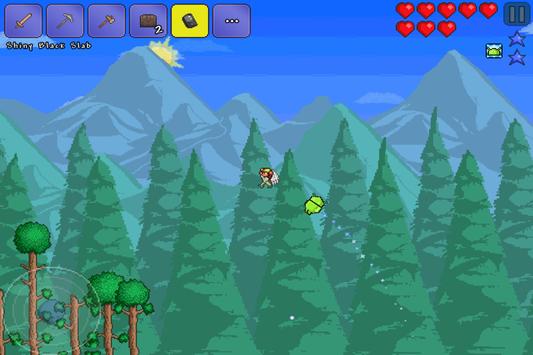 Prepara a jogar Terraria no PC ?