Uno Card Game the fun, classic card game that is the favourite of all the card games. Its really easy to pick up and play and difficult to put down. Its simple to play but still has a strategic component to it

The objective of Uno Card Game is to empty all your cards before the other players get rid of theirs. The player reduces cards by discarding cards that match the top card in the Discard pile.

Use the special action cards to frustrate your fellow players by stealing turns away from them. You can play against one, two or three other players in offline or online multiplayer modes. Match the colour or the number of the last card on the discard stack to play your cards.

Uno Multiplayer Card Game is a very simple color and number matching game. The deck consists of 108 cards, of which there are 25 of each color (red, green, blue, and yellow), each color having two of each rank except zero. The ranks in each color are zero to nine, "Skip", "Draw Two", and "Reverse" (the last three being "action cards"). In addition, the deck contains four each of "Wild" and "Wild Draw Four" cards

Each player is dealt 7 cards and the remaining cards are placed face down to form a draw pile. The first player has to match the card in the discard pile either by number or color or the player can throw down a Wild Card else he must pick a card from the draw pile. If he can play what is drawn, great. Otherwise play moves to the next person.

If you forget to say Uno, you are penalized by having to draw two more cards from the pile.

The first one to get rid of their cards wins!

Do you like playing Uno? Well, brace your wits for a card game that's being billed as two times the fun. Are you ready to play it?

Download Uno Card Game today for FREE and have hours & hours of fun!


Enjoying the game Uno Multiplayer Card Game? Give us a review :) 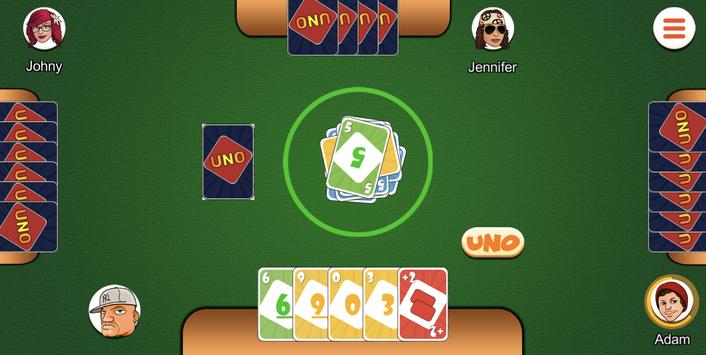